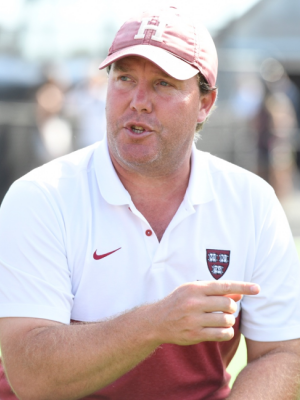 Tjerk van Herwaarden, who won five national championships in seven seasons on the coaching staff at Maryland, took over as head coach at Harvard in 2012, and has quickly led the program to new heights. He enters his eighth season with the Crimson in 2019.

In 2018, Harvard field hockey recorded its best season in program history, with van Herwaarden taking home Ivy League Coach of the Year honors, and his staff named the NFHCA Northeast Region Coaching Staff of the Year. The Crimson finished the year at 17-2 (7-0 Ivy League), recording its best season in program history as the Crimson won its fifth Ivy League title, and earned its sixth NCAA Tournament bid, reaching the NCAA Quarterfinals for the first time ever with a 6-1 win over No. 9 Penn State in the first round. Harvard set a school marks for wins (17) and wins in a row (14), and had the highest national ranking (No. 6) since the program’s inception in 1974. Junior Bente van Vlijmen earned Ivy League Co-Offensive Player of the Year honors. First-year goalkeeper Ellie Shahbo earned Ivy League Rookie of the Year honors. Nine individuals earned All-Ivy League honors with a conference-best five players on the All-Ivy First Team.

In 2017, Harvard finished with a 13-4 record, the most wins in program history. Tjerk van Herwaarden led the Crimson to seven straight wins during the season, matching the program record for wins in a row en route to the highest national ranking (13) in program history. Harvard defeated ranked opponents Pacific (25) and Boston University (21), and beat rival Yale, 2-1 in overtime. Six members of the team earned All-Ivy recognition, and Mimi Tarrant was named Ivy League Co-Rookie of the Year.

The resurgence of the Harvard field hockey team came full circle in 2016 as van Herwaarden led the Crimson to a 12-6 overall record and a 7-0 Ivy League mark. The 12 wins matched the program single-season record for wins in a season and 2017 was the first time Harvard finished unbeaten in Ivy play. For his efforts, van Herwaarden was named Ivy League and NFHCA Northeast Region Coach of the Year. Harvard captured its fourth-ever Ivy League title and first outright championship since 1990. It also appeared in the NCAA Tournament for the fifth time in program history. van Herwaarden’s student-athletes earned seven All-Ivy honors, three all-region recognitions and two players were tabbed All-America.

Harvard’s field hockey program has seen a drastic turnaround under Herwaarden’s leadership. During his second season in 2013, Herwaarden guided the Crimson to a five-win improvement and an 8-9 overall record. Harvard took another step forward in 2014, finishing the year with a 10-7 overall mark, the most wins since 2004, and also posted a 4-3 Ivy League record, the first winning conference record since 2007. The Crimson followed that up with another winning season in 2015, going 9-8 overall with a matching 4-3 conference record. The back-to-back winning seasons marked the first time since 2003 and 2004 that Harvard was over .500 two years in a row.

Individually, Harvard placed five student-athletes on All-Ivy League teams in Herwaarden’s first two seasons on the sideline. In year three, the Crimson matched that number, with sophomore Kyla Cordrey leading the way with a first team nod. Herwaarden’s fourth season saw the Crimson once again place five on All-Ivy League teams, with Elizabeth Jacobson earning a first team selection as a senior. Herwaarden has also coached four NFHCA All-Northeast Region honorees, as Marissa Balleza earned a second team selection in 2013, Kyla Cordrey collected the honor in 2014 and then again in 2015 with Jacoboson.

As associate head coach with Maryland, van Herwaarden helped the Terrapins win the NCAA title last season, following up championships in 2005, ’06, ’08 and ’10. He joined the staff as an assistant coach in 2005 and was named the team’s technical director/coach in 2007.

Van Herwaarden has served as an assistant coach, head coach and technical director at every national and international level over the last decade. He is the only current coach in the country to have won national championships in NCAA Division I, USA Field Hockey Women’s High Performance and the USAFH Men’s National Championship.

Most recently, his experience and knowledge has been called upon by the U.S. National Field Hockey program, serving as an assistant coach during the summer of 2014, leading Team USA to a gold medal at the Champions Challenge and a fourth-place showing at the Rabobank Hockey World Cup. Prior to his assistant position, van Terwaarden served as the interim head coach for the U.S. Women’s National Team in January of 2013. He has also been an assistant coach with the U.S. Men’s National Team, traveling to the 2007 Pan American games and the Olympic qualifying tournament in Auckland, New Zealand in 2008. He was a part of the coaching staff that led the U.S. men’s national team to the silver medal at the 2009 Pan American Games in Santiago, Chile, the highest finish ever for the U.S. men. He also coached the women’s U-16 team in 2006, traveling to his home country, and the U-19 team in Argentina in 2007.

Along with working with the U.S. men’s team, van Herwaarden was also selected head coach of the USFHA’s High Performance Thundersticks squad in 2006. He led the team to the 2006 USFHA national championship.

Prior to joining the Terps, van Herwaarden served as head coach of the Gooische women’s team second Division in the Netherlands, considered to have the best field hockey competition in the world. His main focus was on development of technical and tactical skills.

From 1999-2003, van Herwaarden was an assistant coach of the Kampong 1st Ladies club team, leading them to the semifinals of the national tournament in back-to-back years. While with the team, he mentored some of the country’s top field hockey players who went on to win a gold medal at the 2008 Beijing Olympics and are current members of the Dutch national team.

Van Herwaarden has devoted much of his time teaching the sport of field hockey. He was coach for the KNHB, the Royal Dutch field hockey association, youth development program for five years and was a coach conductor for the same organization, planning course programs and the educational structure for coursework related to the sport. He currently is a USAFH level 2 coaching course presenter and assessor.

Van Herwaarden is the owner and co-founder of Worldcamp USA, which runs Dutch field hockey camps in the United States, and also serves as technical director. He has been a clinician for eight years at the National Field Hockey Festival and is a KNHB Level A and B licensed coach. He has been a guest speaker at the NFHCA’s national coaches convention on several occasions.

Van Herwaarden’s technical expertise earned him a Level III coaching certification, the highest coaching accreditation by the USFHA, in the fall of 2007. He is one of only five coaches in the United States to have reached Level III status and has been given the recommendation to complete an International FIH Coaching Course.

Van Herwaarden was also an account manager for SNS Bank in the Netherlands from 1999 until leaving for Maryland. He earned a business economics degree at the College of Economic Studies, Amsterdam (HES) in 1997.